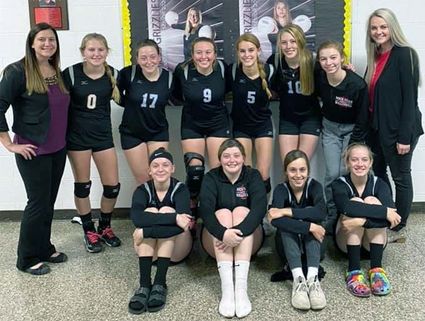 The Rock Hills High School volleyball team closed out the regular season portion of their 2020 season at a triangular match at Osborne last Tuesday. St. John's-Tipton downed the Grizzlies, 5-25 and 17-25, in two sets. Host Osborne closed out Rock Hills, 12-25 and 19-25, in two sets. The Grizzlies traveled to Sylvan Grove, Saturday, for 1A-D1sub-state semi-final play. Clifton-Clyde forfeited their match with Rock Hills. Sylvan Lucas eliminated the Grizzlies from post-season play with their two-set, 15-25 and 12-25, win.

Statistics were unavailable for any of the matches.

The Grizzlies finished the season with a 12-17 record.

Seniors Karrigan Dunstan, Jauclyn Lemke and Hayley Ortiz all played their final match as Grizzlies. The future looks bright with experienced returning underclassmen for next season. A successful crop of Rock Hills Junior High School players with rise to the varsity squad over the next two years.