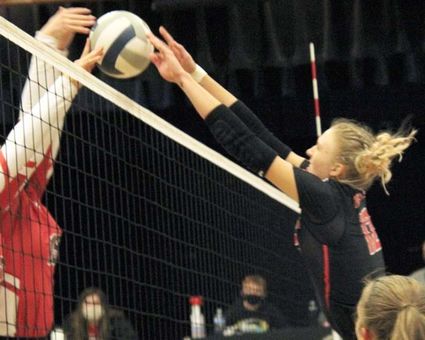 Shayla Meyer (12) dominates the net for Superior during their sub-district match against Sutton at Thayer Central High School in Hebron, Monday.

The Superior volleyball team traveled to Hebron Monday night for their first subdistrict match of 2020. Wow! Both teams wanted to win this game bad. For the in-gym viewers or we KRFS listeners, what an exciting match.

Coach Blevins observations were: "The Wildcats knew going into the match that Sutton was going to be a challenge. The Lady Cats lost the first set 24 to 26. They had a few key serving errors and fought back from behind, but could not catch up in the first set.

"In set two, the Cats came out in a different rotation with Sierra Blackburn starting off with the serve. Emma Henderson had a few key blocks and kills down the line in the second set. Sadie Rempel and Sierra Blackburn both tallied an ace.

"In game three, the Sutton Fillies were swinging away and the Cats were having some trouble defending their aggressive attacks. In the fourth set, the Cats were down the entire set. They were down 12 to 17, 16 to 20 and eventually 19 to 24.

"Atlee Kobza was on the serving line and with the help of her teammates, managed to play flawlessly for the next seven points.

"In game five, the Cats were on fire. Sadie Rempel scored two of the first three points with two aces where the ball hit the top of the tape and snuck over to fall onto the Sutton side. Shayla Meyer tallied kill after kill from the back row along with Cailyn Barry, who had eight kills in the match, a team high of 22 aggressive float serves and two blocks. It was most definitely a team effort.

"Atlee Kobza had a team high of 21 digs, 32 serve receives and didn't let a tip hit the floor.

"The couches are so proud of the Cats for playing with heart and fighting through with a ton of mental toughness to come out on top in round one of the subdistricts."

Sierra Blackburn (5) looks to return the ball to waiting Sutton defenders during Monday's sub-district match. The Wildcats won and played in the final match Tuesday at Thayer Central High School in Hebron.

Sadie Rempel: three aces of 21 serves, one assist of one set, 10 serve receives.