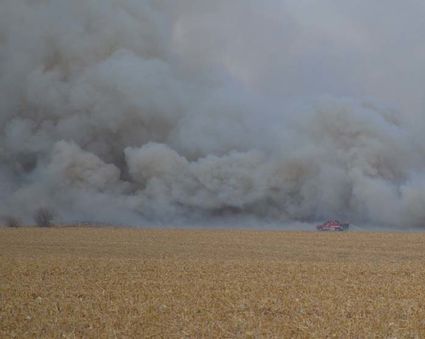 This photo was taken about 3 p.m. Sunday afternoon, after a fire was reported to the Nuckolls County Dispatch. Members of the Nelson Volunteer Fire Department (see rig in right foreground) received the report of a fire along Highway 136 just west of road 3800 at approximately 2:45 p.m. Highwinds, with gusts up to 55 miles per hour, and the gently sloping farm field fully exposed to the wind helped to accelerate the blaze at an alarming rate.

Sunday, was warm and dry with steady wind speeds of 25 to 35 miles per hour and wind gusts as high as 45 miles per hour. A fire broke out along Highway 136 just west of Road 3800. Nuckolls County dispatch received the call at approximately 2:45 p.m. It is presumed to have been started by a cigarette discarded out the window of a passing vehicle. No official cause has been released as of yet.

The fire quickly traveled approximately 4 1/2 miles north to Road PQ. At one point it was nearly half a mile wide. Farmers from around the area brought in their tractors and discs to help slow the fire and protect homes. Twelve fire departments from the surrounding area assisted in fighting the blaze. Departments involved were Nelson, Oak, Ruskin, Superior, Hardy, Guide Rock, Lawrence, Deshler, Hebron, Davenport, Edgar, Red Cloud. Other departments on the scene were the Nebraska State Patrol and Nuckolls County Sheriff's Department. An additional dispatcher was needed to coordinate the efforts. Thayer County and Nuckolls County Emergency Services assisted as well. CPI, Agrex, Mark Thayer, and C&M brought in water trucks to assist volunteers. Numerous farmers and members of the community pitched in wherever needed. Many volunteers donated food, water, and time to put together meals for emergency workers.

Families in the path of the fire hurried to pack their children and whatever else they could fit into their vehicles just in case they had to evacuate. One person interviewed said she was in Grand Island when she got the call. She hurried home while her husband got the cattle moved. She could see and smell the smoke from near Edgar. A family friend was able to get her children and a few of their belongings and take them to safety.

Another person interviewed said that when they were told the fire was headed towards Nelson, they hurried to move their cattle. Unsure of where to go, they headed them west. They secured them in the Nuckolls County fairgrounds arena, hoping they would be safe there. The fire was extinguished just a short distance from their family home.

The community is genuinely grateful to all who answered the call and came to help. Many homes, much livestock, and other property would have been lost had it not been for the assistance coming from several communities. Our small communities may not always agree with each other, but we rally together in times of crisis.