Near Esbon you walk among heroes 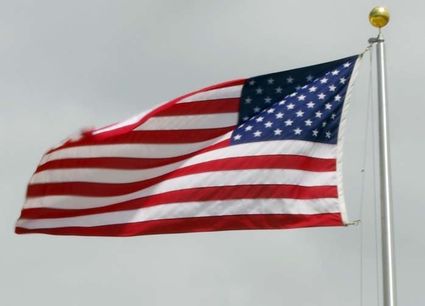 Veterans Day celebrations were planned for Wednesday this week. Many will be quite different from previous years because of COVID-19.

As long as I can remember, November has been the month entirely given to the notion of being thankful. With Veteran's Day quickly approaching, there is not a more appropriate time to acknowledge the brave men and women who have fought for the freedom of this great country. These soldiers risk losing their own lives and freedom everyday to protect our nation.

Across a majority of the United States, you will often see thousands of tributes to our hometown heroes. Esbon is no different. As you round the curve on 112, our wholesome community will greet you with a smile and a wave. Don't be fooled by the appearance of a simple farming community. Here, you'll walk among heroes. Residents of Esbon were asked to share stories of their loved ones who lived, currently live, or came home to Esbon after their time in the service was completed.

Glenn Fogo shared that his father, Chuck Fogo, served as a B-24 pilot in WWII. Mr. Fogo flew 51 missions in the Pacific Theater. Towards the end of the war, he joined the Army National Guard unit in Mankato, which had been activated in response to the Berlin Crisis. He served a year at Fort Bliss in El Paso, Texas. Chuck was promoted to commander of the unit while making his way home. He retired in 1969 and for the rest of his working years tended to the farm. Chuck served for 23 years in the service.

Bev Frost shared that her husband, Dwight Frost, served in the Army National Guard under Chuck Fogo. He also served a year at Fort Bliss in El Paso, Texas.

Joel and Regina Thummel shared that their father, Ted Thummel, was drafted into the Korean War, but served his time fighting in Europe.

Michell Welch Crocker said her father, Larry Welch, graduated from Esbon High School in 1959 and soon enlisted in the USAF. After 20 years, he retired and moved to the neighboring town of Jewell.

Michelle also mentioned that her husband, Ken Crocker, served in the USAF from 1979 to 1985. He helped with aviation maintenance on C130s and 141s during the Somalia-Grenada crisis. They came home to Esbon to be closer to family.

Deanna Winters Underwood said Max Underwood, her husband Roger's uncle, graduated from Esbon High School in 1951, joined the USAF soon after, and did two tours in Vietnam. Dale was assigned to the presidential airwing, serving under President Lyndon B. Johnson. He worked as the crew chief of planes at McChord Air Force Base in Tacoma, Wash., before returning to Esbon to retire. Uncle Verle Underwood graduated from Esbon High School in 1964, served in the USAF from 1966 to 1993, ending his career with the rank of master sergeant.

Jovanna Peroutek said her father, Joe Peroutek, served in the US Navy during peacetime in Norman, Okla., after high school from 1957 to 1960.

Jacque Lorence Johnson said her grandfather, Frank Carver, was in the 1st Calvary B Troupe of 7th Calvary with the U.S. Calvary from 1922 to 1926.

Jacque also stated her father, Gail Lorence, served tours in Germany and Okinawa with the USAF from 1956-1969 during the Vietnam War.

Shirley Hughes Marihugh said her husband, Glenn Marihugh, was studying to be an electrical engineer before enlisting into the Signal Corps his sophomore year. He served from 1954 to 1956.

Terri Lorence Bird said her husband, John Bird, served with the USMC 1st and 9th division. John was in Beirut when it was bombed during Reagan's presidency. He served from 1983-1991.

Donna White Burgess' son, William Anthony Burgess, joined the Army National Guard in his junior year of high school. He is currently a sergeant in the calvary. He served at Tower 22 in Jordan as well as in Syria during Operation Spartan Shield in 2018.

Paula Voboril's husband, Jerry Voboril, served in the Army National Guard after graduating from Esbon High School with the Class of 1962.

Alyce Gillett said her brother in-law, Jay Gillett, joined the USMC in 1945 after graduating from Esbon High School in 1944. He served abroad in the USS Cabot, an aircraft carrier, sailing from Hawaii to Okinawa, Japan. In 2016, Jay was honored with a certificate for being a member of the American Legion in Esbon for 70 years.

Alyce said family member Sam Gillett was drafted into the Army in 1956 and was involved in the National Guard until 1962.

Leta Frost shared that after graduating from Esbon High School in 1961, Ivan Lee Frost served three years in the US Navy as an armed courier guard.

Lorie Pickering said Vurl Franklin Thomas served in the 12th Armor Division as sergeant in WWII from 1940 to 1945. Lorie also said Paul Edward Thomas served as a sergeant in the 1st Platoon B company, 2nd Battalion, 1st Infantry, and 196th Infantry Brigade in the Vietnam War during 1969 and 1970.

Cindy Birney said Vaden Earl Davis, Jr., served as a navigator in the USAF from 1956 to 1959. Vaden was a member of the 61st Troop Carrier Squadron and he flew in C130s. The company transported and dropped parachuting troops and equipment, On Sept. 24, 1957, Mr. Davis' troops received orders from President Eisenhower to transport troops to Little Rock, Ark., to monitor the racial integration of Central High School In 1958, they received a Red Alert to fly troops, ammo and explosives to Ramey AFB in Puerto Rico. They waited for VP Richard Nixon to be safely removed from Venezuela after his car was attacked. After his time in the Air Force, Mr. Davis moved home to Esbon to farm and raise his family until his death.

Nancy Bergman said Neil F. Pate was a corporal in the Army Military Police from 1941 to 1945.

Edgar Marihugh graduated from Esbon High School in 1949. He went on to graduate from Kansas University in 1954. Married his sweetheart Veronica, and shortly after he was called into active duty in the USAF from 1955 to 1958. Edgar and his wife, Veronica, reside in Esbon today.

Jeri Shute said her husband, Ed Shute, was a 2nd LT in the USAF. He joined with the intention of going to pilots' training. His wife was lucky enough to be able to go with him to all of the bases he visited, San Antonio, Texas, Kingston, N.C., to fly T-34s as well as T-28s. Moving onto Greenville, Mississippi. He was a part of a rescue unit. In San Bernadino California. He flew for MATS in C118s. In total, Mr. Shute had more than 2,000 flight hours and made 50 trips overseas. After four years, Mr. Shute decided it was time to come home to Esbon and farm, which he did until he died in 2015.

Daphne Manning's son, Montgomery Manning, has been in the service since 2012.

Bernard Reinert who was in the Army until 1946.

Here in Esbon, in front of the VFW, Sams' Place, there is a monument to a few who went to fight for our great country knowing they may not make it back to their families.

Those who made the ultimate sacrifice include:

All gave some, Some gave all.

We thank them for their service.