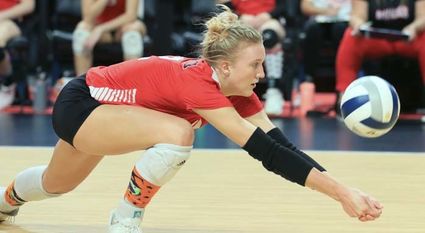 Shayla Meyer (12) digs out the ball for the Superior Wildcats during the state volleyball tournament at Lincoln's Pinnacle Bank Arena Thursday. Superior was eliminated from tournament play with their three-set loss to Norfolk Catholic.

Thursday, the Lady Cats trekked to Lincoln for the fourth year in a row for the state volleyball tournament. They were matched up with Norfolk Catholic for their first round. Norfolk Catholic was seeded No. 2 in the C-2 bracket. Norfolk Catholic ended up playing in the championship match on Saturday.

This sports writer has been impressed with how much the team has improved over this season. There are still some fundamentals that need more improvement, but, WOW, it was great they played well enough to get to the state tournament.