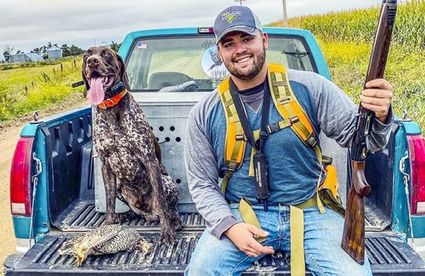 Payne Ahrens shows off one of the four birds he bagged to complete the Upland Slam. The slam is sponsored by the Nebraska Game and Parks commission, Pheasants Forever and Quail Forever. Ahrens hunted with one of his two German Shorthaired Pointers and used a 20-gauge shotgun to bag a ring-necked pheasant, sharp-tailed grouse, greater prairie chicken and northern bobwhite quail to complete the slam. Three of the birds were taken in Nuckolls County and the grouse was taken in North-Central Nebraska.

Payne Ahrens used his job as a farm hand to his advantage before last month's upland bird season opener.

While harvesting corn for his employer, Danny Corman, the Superior man also was scouting for his hunt. This paid off as he found the ground and, on opening morning, Saturday Oct. 31, the birds. As a result, he became the first hunter to complete 2020 Nebraska Upland Slam.

The challenge of the Upland Slam, a partnership among the Nebraska Game and Parks Commission, Pheasants Forever and Quail Forever, is to harvest a ring-necked pheasant, sharp-tailed grouse, greater prairie-chicken and northern bobwhite quail in Nebraska this season.

Successful hunters then go on-line to upload a photo of each harvested bird and provide details about their hunt. Those who complete the Slam receive an official certificate and pin and are entered into a drawing to win one of several prizes, including a Browning Maxus 12-gauge shotgun. Hunters can also upload a photo of their dog for a top dog award and certificate.

Ahrens bagged his pheasant and quail Oct. 31 in Nuckolls County and his greater prairie-chicken Sept. 10 in Nuckolls County. He shot his sharp-tailed grouse Sept. 26 in Holt County. The grouse hunt entailed a 12-mile walk. All were taken on private land using a 20-gauge shotgun. Ahrens hunts with two German short haired pointers.

This is the third year of the Upland Slam but the first year for Ahrens, who had been guiding in Wyoming and South Dakota the past two years.

"I finally had more time on my hands and felt like it was a challenge," he said. "I kind of made it a goal to get it done."

He is a partner in Blue Skies Outfitters based in Mitchell, South Dakota. He joins his business partner during hunting season. He is residing in Nuckolls County now.

Before this fall, Ahrens had little experience hunting sharptails and greater prairie-chickens. That will change. "I kind of fell in love with the prairie chicken hunting and the walking for sharptails," he said. "I'm definitely doing it again."

More than 32 hunters have completed the slam so far, and submissions are coming in daily.

The first youth to complete the 2020 Upland Slam was Thayne O'Hare of Cozad. The 11-year old harvested his pheasant in Custer County, quail and greater prairie-chicken in Phelps County and sharp-tailed grouse in Box Butte County.

New this season, resident hunters 15 or younger are encouraged to complete the slam They will be entered into a separate drawing for a Resident Youth Lifetime Hunt Permit.

The first two seasons of the Upland Slam were a great success, with more than 540 hunters participating, including hunters ranging in age from 9 to 80.