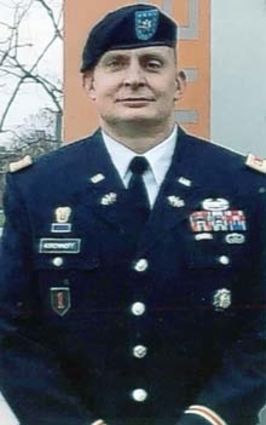 Steve Kirchhoff, a Hardy native and a 1995 graduate of Superior High School, was recently promoted from major to lieutenant colonel in the U.S. Army. The promotion ceremony was conducted Nov. 12 at the Aberdeen Proving Ground in Maryland. The ceremony was presided over by Maj. Gen. Pete Gallagher, director of the army's Network Cross Functional Team. Maj. Gen. Gallagher provided opening comments recapping Kirchhoff's career and highlighting the important work he is doing.

Gallagher and Col. Rob Ryan then pinned on the new rank before Gallagher administered the oath of office.