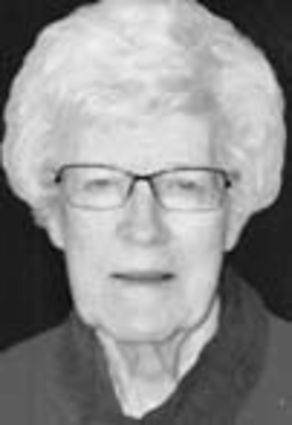 Maureen Frances (Menke) Faimon, formerly of rural Blue Hill, Neb., died Monday, Nov. 23, 2020, at Edgewood Vista in Hastings, Neb., at the age of 84 with family by her side. The rosary was at 7p.m., Friday, Nov. 27, at St. Stephen’s Catholic Church, south of Lawrence, Neb. The funeral was at 10 a.m., Saturday, Nov. 28, at St. Stephen’s Catholic Church with Father Corey Harrison officiating. Visitations were be offered from 3 to 8p.m. Friday, and from 8 to 9 a.m., Saturday at the Visitation Chapel in Lawrence. There was not a viewing at the church. Memorials will be determined by the family at a later date. Private condolences may be sent to the family at http://www.mertenbutlermortuary.com. The service was livestreamed through the Cchurch’s Facebook page at Sacred Heart and St. Stephen-Lawrence and Our Lady of Assumption-Deweese. Merten-Butler Mortuary, Blue Hill, Nebraska was in charge of arrangements.

Maureen was born on Nov. 6, 1936, to George Menke and Alvera (Buescher) Menke in Nuckolls County. She attended grade school at St. Stephen’s Catholic School and graduated from Lawrence Public High School in 1955.

Maureen married Robert A. Faimon on Jan. 31, 1956, at St. Stephen’s Catholic Church. They were blessed with eight children, 29 grandchildren and 38 great-grandchildren.

Maureen is survived by her children, their families and her siblings: Jolene Faimon-Mazour, Lawrence; Jenny and Matt Utecht, Marcus and Gracy; Mike and Stacy Faimon, Kayla, Josie and Cooper; Sara and Jason Meents; Layna, Cali and Bryn; Dr. Jeffrey and Mindy Faimon, Grady, Kash and Lawsyn.