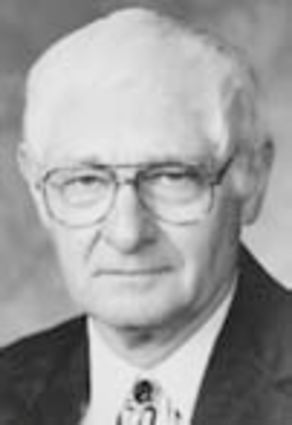 In 1931, the young Roe family bought a farm in Harrison Town -ship and Lauren lived in Harrison Township the rest of his life. Lauren grew up in the Olive Hill community and graduated from eighth grade in country schools there. He then attended Mankato High School graduating in 1946.

Lauren attended Kansas State University one year and regretted his short tenure there, but times on the farm in post WW II Kansas were busy, and his labor was acutely needed.

In 1951, Lauren enlisted for two years in the U.S. Army, a time he was proud of. While first stationed in Colorado on July 4, 1951, he had a blind date with Virginia Ann Lewis of Brush, Colo., a student at the University of Colorado. Lauren and Virginia had a long engagement because Lauren was deployed overseas with the Allied Occupation Force in Germany and Virginia completed her college degree. They were married Aug. 2, 1953, at the Rankin Presbyterian Church in Brush.

Lauren was a farmer and rancher and an integral part of many successful family farm partnerships with his father, brother, his son and a nephew, Harrell. In various years of farming. He especially enjoyed combining wheat, tillage with the large four wheel drive tractors and attending livestock auctions to purchase cattle.

Lauren had an enthusiastic embrace of life and family. He was not afraid of a high profile and being active in whatever community activity or pursuit he was involved in. Such activities would include board service with the rural electric cooperatives and the First Presbyterian Church in Superior, plus work with the Kansas Livestock Association and Keith’s political campaigns.

Lauren was known for his purple shirts, boots and hats and wearing Native American bolos and belt buckles. He was quick with a hug or warm greeting that declared you were just the person he wanted to see that day.

Virginia was his favorite dance partner and travel companion and the love of his life. For decades they were aggressive at taking many short trips often overnight to dances, sporting events of K-State or Colorado, visiting grandchildren in Johnson County, Kansas or a great-nephew’s graduation in Wyoming. They had dances with live bands for their 25th, 40th, 45th and 50th wedding anniversaries, planned by Virginia and enjoyed by their family and the entire community.

After Lauren’s stroke in 2007, he was still able to have seven more years at the farm because of his primary caregiver ,Virginia. As recently as 2009, they attended every KSU home football game. Lunch at the Lovewell Lake Marina was required several times a week.

Lauren was preceded in death by his sister, Ilene Joyce(Roe) Headrick.