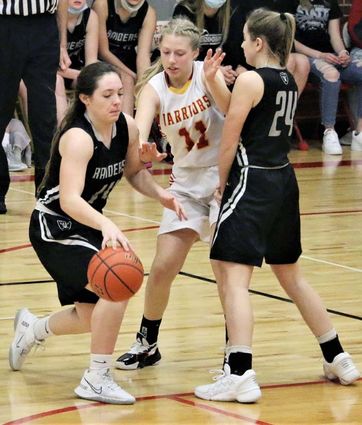 Any way you look at it, sports in the year 2020 will be remembered as being . . . well . . . different. From junior high and high school to the professional level, the year will be remembered for a wide variety of reasons. It would take a book to list even a few of the reasons.

However, high school winter sports began in Nebraska last week . . . minus a lot of fans and the addition of the wearing of face masks.

For the L-N girls' basketball team, the beginning looked good . . . after a pre-season concern about the number of girls graduated last year . . . the inexperience of this year's squad . . . and what about COVID itself.

And, you know what?

All that worry may have been for nothing . . . or was it? The game summaries:

L-N – RED CLOUD: 39-32: A seven point win for the first game of the year is certainly not bad. However, at halftime of the game the Raiders were leading by 16 points.

Half No.2: The girls maybe were a little too comfortable with their 16 point lead at half time as they allowed Red Cloud to make a come-back in the last half allowing Red Cloud 50 percent of their field goal attempts. L-N hit a rough last half of the 4th period being out-scored 9 to 1 as Red Cloud hit 5 out of 9 free throws in that time.

However . . . for the first game, it was a good win. Emma Epley led all scorers with 15, Emily Miller hit double figures with ten, Aleah had 8, Alex Miller chipped in 4 and Elsa Jorgensen had 2 points.

L-N – TRI COUNTY: 51-25: The friendly confines of the home basketball court was the scene of the Lady Raider's first home game last Saturday afternoon. And that may just have been a good thing.

Except for about the first minutes of the game, the Lady Raiders dominated the game and ended it with a 26 point victory. A lot of things are considered when looking over game results. In this game, one primary factor was defense. Specifically, the number of turnovers. Tri-County (TC) was forced to give up 28 turnovers, a number of which ended up giving the Raiders easy points. L-N had seven turnovers. Another aspect of defense is the shooting percentage of an opponent. In the first two games, L-N has shot well over 30 percent from the field. In this game, TC made only 20 percent.

TC scored first in the game and for about four minutes it looked like this might be a tight ball game. However. In the last four minutes or so, Emma Epley and Emily Miller heated up the nets and tossed in ten points to give L-N a comfortable lead, 18-7.

In the second period TC had a string of fouls and turnovers and made only two of 15 shots against a strong Raider defense. Half time score: 28-11.

There were no second half let-downs in this game and quite a bit of team basketball to watch. One play stood out was a Heikkinen pass to Emily M. resulting in a layup. Emily M. contributed nine of her game high points in this period. Score 41-19.

Coach Peterson gave nine players time in the game, allowing some of the younger players some varsity experience. Eight players scored with the final three points coming from freshman, Jessica Sole with about a minute left in the game as she drained a 3-pt. shot. Final score: 51-25.