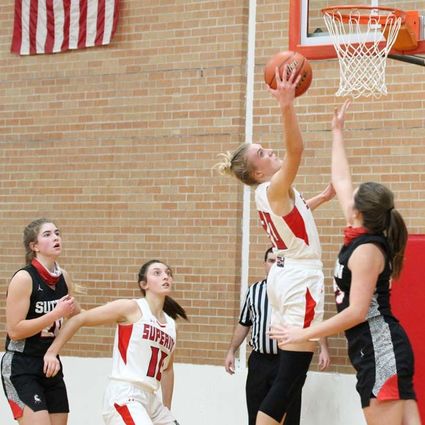 Shayla Meyer (30) goes to the basket as Atlee Kobza (10) anticipates a rebound for Superior during last Thursday's season opening game against Sutton at Superior.

It was a disappointing outcome for the Superior High School girls basketball team as they made their debut under the guidance of new head coach Jake Nannen. Nannen, a fifth grade teacher at Superior Elementary School, took over the reins from Jim Sullivan, who stepped down after the conclusion of last season.

Nannen and his team opened with the traditional girls only game against Sutton at the Superior High School gymnasium. The Wildcats were on the short end of the 50-32 score.

Both teams were competitive through three quarters. Superior trailed 19-11 at the halfway mark. They nibbled aw...