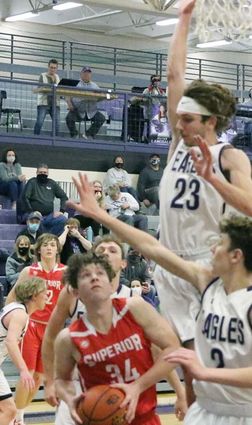 Jedd Whitmore (34) looks for room among a cluster of Southern Valley defenders during Superior's game at Oxford Friday.

The Superior Boys Basketball team traveled to D1 No. 4 ranked Southern Valley Friday for a clash with the Eagles. The Cats trailed by four points after the first quarter. Southern Valley extended their lead in the second out scoring Superior by 7 in the period. "Our 1-3-1 defense gave them trouble early, but in the second quarter they started to figure it out. We switched to man-to-man in the second half and played much better defense," said Coach Chadwell.

Superior won the third quarter 8-7, still trailing in the game by 10. "Another sub-par shooting night plagued us. We shot 20 percent...