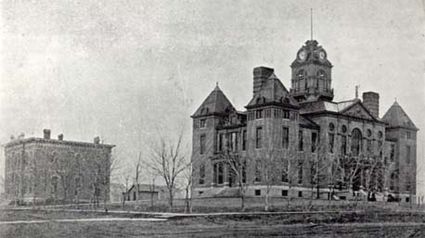 The county jail is shown in this photo taken soon after the Nuckolls County Courthouse was constructed 1890. Built in 1878, the jail is one of the oldest buildings in Nuckolls County but it may soon fall to a wrecking ball.

One of the oldest buildings in Nuckolls County is being phased out of use. This week the Nuckolls County Sheriff's department is moving to its new location on East Fourth Street in Nelson. The sheriff's office had been associated with the Nuckolls County jail since this jail's construction 142 years earlier in 1878. The early history describes the jail as a fine appearing brick structure costing $10,000 and occupying the highest point of ground within the corporate limits of Nelson.

During the regular election on October 12,1875, the question of levying a four-mill tax for three years for...