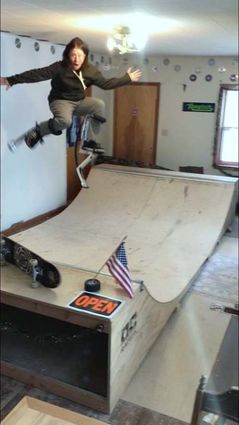 In this series of photos, James Bailey demonstrates jumping stilt skills for the readers of The Superior Express.

Did the ice and snow shut you in the house Tuesday? How did you pass the time? Did you play video games or watch television while snacking? Apparently James Bailey didn't do those things. Instead he honed his jumping stilts skills.

After learning about James and his jumping stilts, The Express asked if a photographer and reporter could meet with him and do a story. We assumed the meeting would have to be after the ice and snow melted. We were wrong. In an hour or so James has sent us several photos showing skill with the jumping stilts. The pictures were taken inside his house.