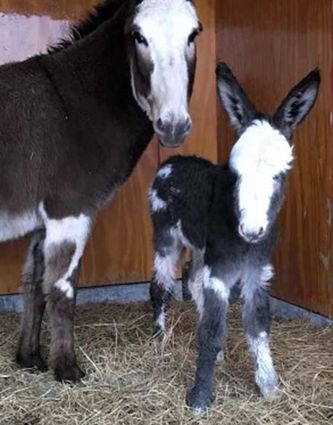 A spotted donkey colt is a new addition at Gordon Murray's corral. It has dominate spotted markings like its mother.

There is a new addition in the Murray corrals! A week ago spotted donkey colt was born. It is a female "Jenny." Its mother also has spotted markings which is a dominate feature. When Gordon Murray, Mankato, purchased the mother, she had a colt on her and was placed in a corral with some male donkeys or "Jacks." It was a bit of a surprise when it was noted she would have another colt so soon.

A name for the new colt has yet to be determined. Murray has received several suggestions including Bunny because of the obvious long ears, and Angel because of the white of the inner part of the ear...