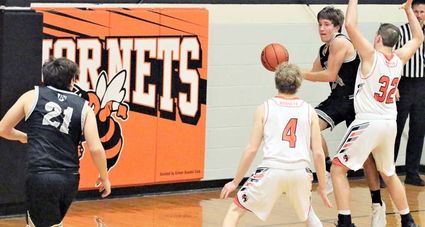 Between a rock and a hard place . . . Tyson Kotinek tries to save the ball from going out of bounds in this picture as he is crowded against the court boundary by the Giltner defenders. However, he has a friend waiting for the pass in the person of teammate Erik Wheeland.

The Lawrence-Nelson boys basketball team allowed last Tuesday's game with McCool Junction, at Nelson, slip away to a 48-40 loss. The Raiders hung on to down the Giltner Hornets, 53-42, at Giltner, Thursday. The Raiders visited Mankato, Tuesday, for a contest with Rock Hills. Game results were unavailable at press time.

The Raiders led McCool Junction 31-26 at the halfway mark. An offensive drought over the third and fourth quarters led to their 48-40 loss. Lawrence-Nelson was out scored 22-9 and recorded their sixth loss of the season.