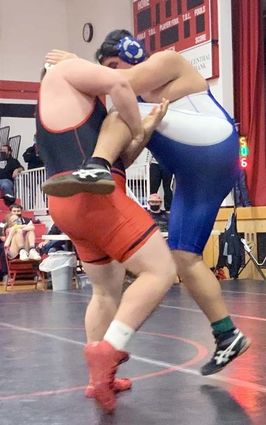 Payton Christiancy (left) engages with his opponent in the 285 pound weight bracket at the Franklin Invite Saturday. He took first place.

The Superior High School wrestling team competed at the Franklin Invitational, at Franklin High School Saturday. They finished in fifth place in the 13 team field with 105.5 points.

Hayden Neeman brought home another first place finish in the 106 pound weight bracket. He earned 26 team points. He has lost one match this season.

Brett Miller competed at the 113 pound weight class. He scored no team points.

Aaron Allgood took fifth place and nine and a half team points at 138 pounds.

Aaron Allgood keeps his opponent in the 138 pound weight class under control during a match at the Franklin Invite Saturday. Allgood finished in fifth place for Superior.

Jordan Brown competed at 182 pounds and earned no team points.

Anders Webber stood on the second place step of the podium in the 220 pound weight bracket. He was awarded 24 team points.

Payton Christiancy worked his way to another first place finish in the 285 pound weight bracket. He added 24 team points to the team total.

Seth Going, head coach, said "I am always proud of our guys. We have a chance to do some really great things this season. Time is getting short and our wrestling room needs to pick up its intensity another notch."

The Wildcats travel to Harvard Thursday for a triangular meet.

The team hosts the Superior Invitational at the high school gymnasium, Friday, with a 3:30 p.m. start time.