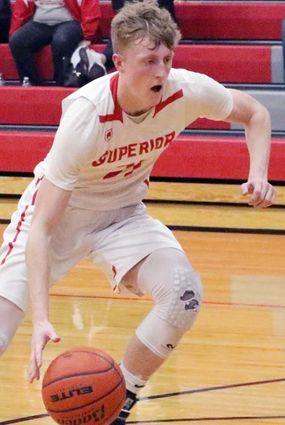 Dane Miller moves the ball up court for Superior during Friday's game at Superior against Thayer Central.

Superior hosted Thayer Central Friday. The game was tight in the first quarter with Superior leading 12 to 8. The Cats went on a nice run throughout the second quarter extending their lead to 27 to 15. Superior maintained their lead in the second half countering all of Thayer Central's attempts to get back into the game. The Cats came out with a 53 to 36 win. "Our defensive effort was great tonight. Holding a team that averages more than 60 points a game to 36 points was a great team effort," said Coach Chadwell. Superior shot 34 percent from the field as a team. But their 20 offensive rebo...