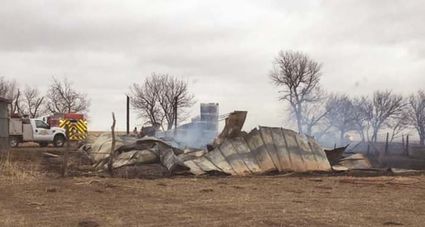 In recent weeks, Christmas letters from friends and relatives living in places like Colorado and California were filled with stories about the wildfires which caused much damage in those states in the past year.

After Thursday and Friday, area residents have their own stories to tell. The South Central Cattlemen's Association is collecting donations of feed, fencing supplies and money to help those affected by the fire.

The biggest of the fires occurred Thursday afternoon when winds gusting near 60 miles per hour fanned embers in a pit about XX miles north of Guide Rock which earlier had been used to burn trees.

The fire raced southeast as the call for help was sounded.

Fire departments from multiple counties responded along with area farmers.

Residents down wind from the fire were told to evacuate their homes while others attempted to move cattle out of the fire's path. Friends and family rushed in to help with the evacuation and movement of livestock.

One report indicated 350 head of cattle had been released.

By Friday morning, those animals had been rounded up and were being moved back home. However, water was a problem. Plastic tanks caught in the fire line had probably melted and metal tanks were filled with dirt and soot contaminated what water remained.

High winds on Friday created blinding dust storms as they roared across the fire scored land.

Before it was controlled, the fire had left Webster County and burned to within two miles of Bostwick.

An estimated 26 miles of fence was destroyed as the fire burned over more than 11 sections. The loss of hay and feed has not been calculated but it was substantial.

There have been uneasy days since as residents watch to make sure the fire doesn't rekindle and again go racing off.

Several farmsteads were in the fire's path but fire fighters were able successful protect them all and divert the fire.

Friday morning dirt and soot on the front yard of the Kent Duffy home was said to be four inches deep.

Homes downwind of the fire were filled with dust. Several inches of dirt were piled between window screens and windows and furnace filters plugged.

Fire departments from as far away as at least Hebron answered the call for assistance.

The fire dancing across the Webster County hill tops was visible in a large area around Guide Rock. Even Jack Baker who lives on the stateline west of Highway 14 was able to see and photograph the fire from his house.

Limited visibility and the rough terrain made it difficult for farmers with tractors pulling discs to create the needed fire breaks. The fire seemed to hop-scotch to the southeast. The fire jumped both county roads and highways and seemed to break out and burning in multiple locations at the same time. It started west of Highway 78, crossed Highway 136 and was stopped near the Republican River.

All Nuckolls County fire departments as well as departments from other neighboring counties responded to the Guide Rock call for assistance. Reports indicate there were at least 15 departments fighting the fire.

Ready-mix concrete trucks and fertilizer tanks were used to haul water to the fire trucks. Other businesses donated water and food for those fighting the fire.

Friday morning the firefighters feared it was all starting over.

This time, a barn near the intersection of PQ and 3100 roads southwest of Nelson was reported to be on fire.

As the Nelson department raced to the fire scene, the call for mutual aid was sounded.

When firemen arrived, they found a barn built in 1905 on what has long been known as Jacobitz farm about one mile south and 5 miles west of Nelson was fully engulfed in fire.

The barn had been used for hay storage for quite some years, but was originally built by Albert Jacobitz and his father, Ferdinand Jacobitz, around the same time that Albert's daughter, Edna, was born in 1904.

Albert used the barn with his dairy. It was the only structure left on the family homestead. In addition to the barn the Jacobitz family lost 1,500 small round bales of alfalfa hay stored in the barn and about 60 large round bales of prairie hay which had been stored nearby. They considered themselves fortunate to have earlier moved the cattle which had been at that place.

The family is also thankful the fire only spread over about three-quarters of a section. Had it continued on, their home was in the direct line the fire was expected to follow.

At least 10 farmers who still had discs coupled to tractors after fighting Thursday's fire were able to quickly respond to the call for help. And unlike Thursday's fire which was in a rolling countryside, Friday's fire was on much flatter land and easier to control.

The Superior Fire Department was able to return home before noon on Friday but firemen stayed on the scene throughout the day watching to make sure the wind did not whip the fire back up.

Those willing to donate hay or other feed to the fire victimns are asked to contact Scott Bonifas at 402-984-6223; fencing supply donations are being accepted at the Ely Grain Company at Guide Rock. Cash donations may be sent to South Central Cattlemen in care of Kelsey Herz 2419 Highway 4, Lawrence, Neb. 68957. The cattlemen said all of the deposited donations will be dispersed.

A smaller fire Thursday afternoon in the Esbon area closed Highway 36 for a time. Like the Guide Rock fire, that fire jumped the highway.

We are indebted to area fire departments, law enforcement offices and area residents who shared their pictures of this week's fires. They were on the scene and able to provide quality photos without the need for this newspaper's photographer getting in the way of those fighting the fires. If you are interested in seeing more fire pictures we encourage to visit The Superior Express and Jewell County Record Facebook pages where you will see more photographs showing the damage caused by the high winds on Thursday and Friday.