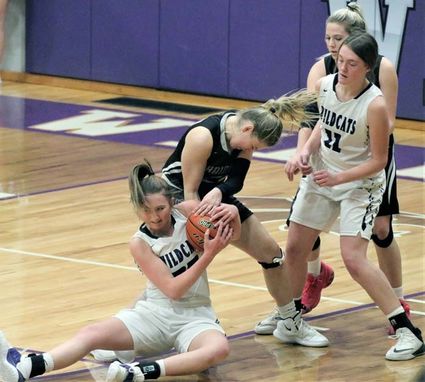 Sometimes you have to work for success . . . like McKenzie Ostdiek is doing in this picture, trying to steal the ball from an equally determined Axtell player.

The Lawrence-Nelson girls basketball team has hit a rough patch. The team has lost their last three games. The streak began last Tuesday when they fell to the Rock Hills Grizzlies 46-38 at Mankato. The Kenesaw Blue Devils took down the Raiders 55-32 at Nelson Friday. Their woes continued Saturday when their trip to Axtell resulted in a 48-27 loss to the Wildcats. The Raiders hosted the Deshler Dragons at nelson Tuesday with game results unavailable at press time.

Rock Hills took the lead and never looked back in last Tuesday's game. Lawrence-Nelson trailed 16-10 at the half and was unable...