It's slick out there so "Walk like a Penguin" 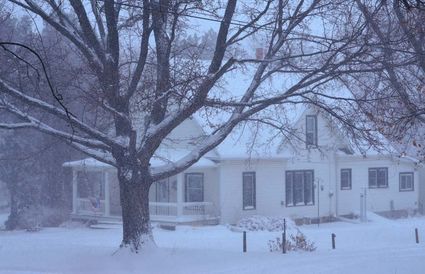 The home of Janice Culberson, located on the corner of North Wheeler and West Gourlay streets in Nelson, makes for a pretty backdrop against the falling snow on Monday afternoon. The home once served as a hospital. Snow accumulation was between four and six inches at the time this photo taken around noon on Monday. Nelson residents who were unable to stay in during the storm reported white out conditions and snow covered roadways. One resident stated that during the commute home, they were unable to determine what lane they were driving in and that a normally 15 minute drive took more than an hour.

Winter has finally arrived, and in true fashion – slick surfaces are covered by plenty of snow. And whether you are walking in your driveway, on the sidewalk or on the farm doing chores, it's slick out there!

People of all ages fall on slick surfaces and are injured – some fatally - during winter weather.

Nelson Rescue Squad would like to remind you to be careful in these weather conditions. First of all, dress properly. Wear non-slip footwear – preferably with rubber soles. Do not wear leather, plastic or similar footwear that would only make things worse.