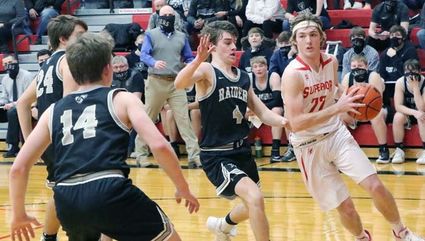 Zeke Meyer (22) works his way around Lawrence-Nelson defenders Krayton Kucera (14) and Cole Troudt (4) during Friday's game with Superior at Superior.

"Time flies when you're having fun . . ." As the old saying goes. It didn't seem all that long ago when the Raiders seemed to be having trouble getting their game together and had a record of 5 wins and 10 losses.

All of a sudden we're here near the end of the regular season and the Raiders have won six and lost one of their last seven games as they have been playing some of their best basketball of the season. The final regular season game is this Friday against a good Deshler team on the home floor in Nelson.

The boy's sub-district start next week. We don't know where at for sure, but t...