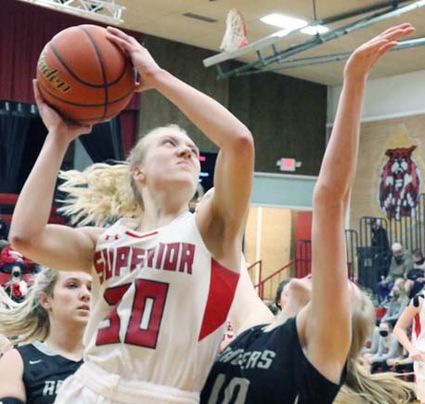 Shayla Meyer goes to the basket for Superior during their last regular season game Friday. They downed Lawrence-Nelson at Superior. They opened sub-district play Tuesday.

Friday, the Lady Cats basketball team hosted the Lawrence-Nelson Raiders. It was the SHS Parent's Night. The Lady Cats' only senior to be honored was Sierra Blackburn. The Lady Cats outscored the Raiders in two out of four quarters:

"We came out of the gates with excellent defensive intensity, holding the Raiders to three points in the first quarter. That really helped us set the tone for the rest of the game defensively."

"Offensively, we did a much better job of being patient and getting good looks at the basket consistently throughout the game. We shot the ball very well from three in the third quarter, knocking down four 3s. When we can knock down shots confidently from three, we can be really dangerous."

"After a three game losing streak to some tough opponents, this was a big game for us to find our confidence and get back in the winning column. This win should help our mindset tremendously as we head into post-season play next week!"

Shayla Meyer and Sierra Blackburn scored in double digits with 17 and 11 points, respectively. Shayla also led in rebounds with 10. Emma Henderson had 8, Sierra had seven, Laci Kirchhoff had five, Ella Gardner three, and Attlee Kobza one.

Ella led in assists with four. Shayla had three, Laci two, and Sierra one.

Sierra and Laci led in steals with seven and three steals respectively.

Shayla had five turnovers, Ella four, Attlee three, and Laci and Neah McMeen each had one.

Shayla had the only block for the Lady Cats. She ended the game with a double-double-17 points and 10 rebounds.

Next up was a sub-district match-up vs. Thayer Central at Sutton on Tuesday at 7:30 p.m. Results of this game were not available at press time.