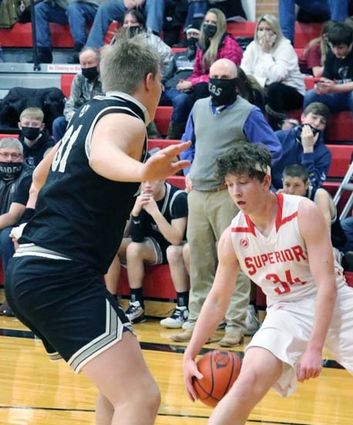 Jedd Whitmore maintains control of the ball for Superior as Blake Wroughton (34) defends for Lawrence-Nelson during their game at Superior Friday.

The Nuckolls County boys basketball rivalry took place in the SHS gym. Lawrence-Nelson went home with the win over Superior 44 to 33.

"The Cats busted out of the gates with an early 10-3 lead. Lawrence-Nelson calmed the storm taking a 15-14 lead advantage after the first quarter. The Cats struggled from the field scoring only two points in the second quarter and trailed 27 to 16 at the half. A couple runs by Superior were countered by the Raiders. Lawrence-Nelson was the better team. They out-physically beat us on both ends of the court. It was a frustrating night for us," said Coach Chadwell.

Superior ends their regular season on Friday night, at Sutton.