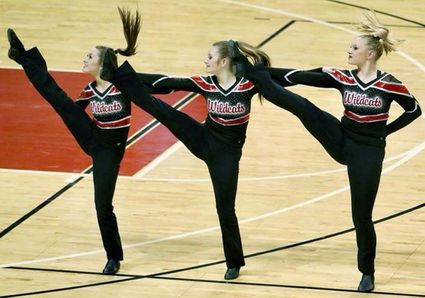 Haley Blackstone (left) has her hair and leg up high as she joined with fellow Superior Drill team members Neah McMeen and Brooklynn Grabast at the state C-2 Drill Team championships in Omaha last Wednesday. Superior earned the championship award in the high kick for the second consecutive year.

The Superior High School Drill team returned from the state championship meet at Omaha with another trophy for the trophy case. The team was once again judged to be the best of the best in the Class C-2 High Kick competition. The team retained the title they earned last year. This is their third title in four years.

The team will compete at the national level this year. Because of the pandemic, the event will be a virtual competition. Stephanie Corman, team coach, relates that she will record the team performing in the high school gymnasium and submit the tape to the national committee. T...