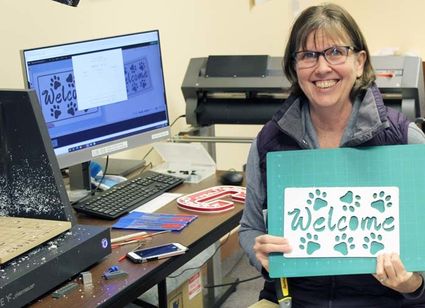 Deb Ostdiek displays the welcome sign she fashioned on the CNC router which is part of the Innovation Studio program at the Superior Public Library. The studio is set to leave Superior in the next week.

The Superior Public Library has been home to the Innovation Studio for five months. Vickie Perrie, librarian, related it will be departing for Lincoln for maintenance on the machines, supply restocking and then placed at another library in the very near future. It is one of several studios outfitted for use by public libraries,

The Library Innovation Studios project is overseen by the Nebraska Library Commission. Thanks to a grant, the library commission has been able to outfit several studios for placement in libraries in towns large and small.

The concept is simple. Open up the possibil...