Deal in the works to reopen Burger Barn before Vestey Days

With the sale of Bagley's Burger Barn, Saturday, the long chapter of the Superior Dairy Queen came to a close. The original store was located on East Third Street near Maxey's Service Station. The original site later became the Kurly Kone and is now a used car lot.

The restaurant had several owners and operators over the years. Mrs. Earl Osborne was the original operator. Gladys Free operated the Dairy Queen along with Marjorie Riggs. Mr. and Mrs. Dale Blackburn owned the establishment. Leo Zadina bough the Dairy Queen with his wife, Betty, operating it. Gay and Larry Boardman and Mary Drapal also owned it at different times.

Dick and Janene Bagley purchased the Dairy Queen in 1980 and operated it for the next 40 years.

The Bagley's ceded the Dairy Queen franchise back to the parent company. The restaurant was rebranded as Bagley's Burger Barn. They continued to serve ice cream and burgers as well as other menu items.

The COVID19 pandemic resulted in altered hours and the closing of the dining areas.

A mixed crowd of prospective buyers and curious onlookers gathered at the location for the 1 p.m start on Saturday. Neil Bouray, the auctioneer, started the bidding. After a short break, the bidding resumed. The bid price failed to satisfy the reserve price and the auction was ended. Prospective buyers were advised to contact the realtor should they be interested in purchasing the property.

An after auction sale was completed and now awaits the formal closing of the sale. A limited liability corporation of Phil Simonsen, Nate Saathoff and Gordon Wells are the soon-to-be owners. 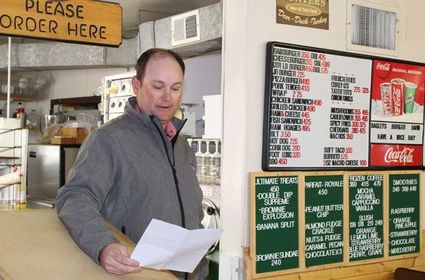 Neil Bouray is ready to chant the auction for Bagley's Burger Barn in Superior Saturday. The former Dairy Queen did not sell at auction but was purchased later in the day in a private transaction.

According to Simonsen, the group will hire a manager and staff for the daily operations. The plan is to be open for the Vestey Festival weekend. The establishment may offer a limited menu when it reopens. The return of the burger barn will be a welcome addition to the Superior dining scene.

For the Bagley's, it is time for a well-deserved retirement. For the new owners, it is a way of keeping a long-time Superior tradition going for many more years.