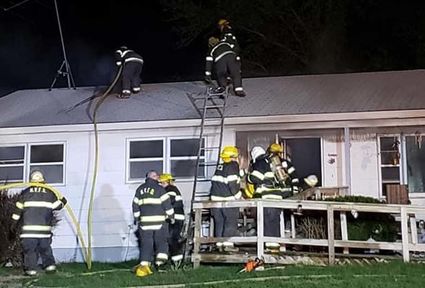 Firemen worked into the early hours of Wednesday morning after this Nelson home caught fire Tuesday evening. The firemen had to cut holes into the roof and sides of the home in order to get the blaze under control. It is believed that the fire started in the basement of the home.

Last Tuesday evening, around 9:45 p.m., the home of Tim Reeves, located at 235 W Gourlay in Nelson, caught fire. At the time of the fire Cathy Rook, Tim's significant other, her daughter, Fayth, and Tim's son, Jered, were home. Tim was finishing the late shift in Hastings when he got the call.

Cathy was settling in for the evening when she heard her daughter's cry for help from the basement. When Cathy opened the door to the basement stairs, she was met with a cloud of rolling smoke. Luckily she had her phone and was able to call 911. They left the home and were taken to Brodstone Memori...