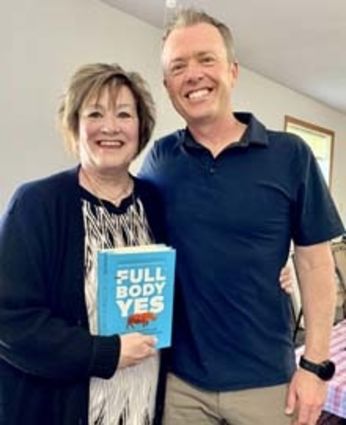 Mary Sawyer and Scott Shute visit after a presentation of Shute's first published book. Sawyer was his English teacher in high school when he attended White Rock Schools.

The Republican Valley Arts Council recently held their spring brunch and meeting in Red Cloud at the renovated Scout House. The guest speaker was Scott Shute, who attended White Rock Schools before transferring to Red Cloud Schools his junior year. He has traveled the world. While in high school, he was an exchange student in Japan. As an executive with LinkedIn he lived in Japan for two years. Before his present position with LinkedIn, he was the vice president of global customer operations with the company.

Scott is now the head of Mindfulness and Compassion programs at LinkedIn. Basically, his job is to develop teams within businesses to work together well with compassion and understanding of people around them. He hosts workshops, retreats online classes and executive coaching on mindfulness and compassion for life and the work force.

This week Scott's first book, The Full Body Yes, was released to the public. During his presentation at Red Cloud, he explained experiences in his life that led to the writing of the book.

Several stories are about growing up in a rural community, how he gained spiritual awareness and learned about himself, patience and compassion. In the workplace he tells of times he struggled and watched others as they tried to find a way to blend work, family and happiness. Eventually, he discovered it begins with self. We have to know and like ourselves first before we can understand others.

Scott is the son of Jeri and the late Ed Shute. He is the youngest of their five children. All of his family members have unique talents from musicians and farmers to writers. Scott's mother, Jeri, is co-author, with Irma Dillon, of Prairie Jewels. Scott has always been highly competitive with his older siblings and has become an executive, photographer, musician and author.

In his book he introduces his readers to life in rural Kansas. He tells what it was like to go to a small school, how at times he was bullied by others and the rage that he had during those encounters. He believed he had to be the best at everything he did to gain acceptance.

He introduces the reader to life in a small community by telling about the phone calls the family received from the Highland Township correspondent for the Jewell County Record. "This township is a 36 square mile that we live in and mostly made up of 30 folks who go to our country church," he writes. He follows this with a typical news item in the Highland Township Update:

Ed and Jeri Shute were pleased to host their nephew, Philip, along with wife Kaitlin, for the weekend, visiting from Broken Bow, Neb. Their son, Cole, has a birthday coming up. Jeri made a cherry pie for the occasion. She says the chokecherries are nearly in season and soon there will be jam.

Another time tells of a hailstorm he witnessed as a child in the '70s. He was gleeful and awed by the huge hail stones. He and his sister ran out into the yard to gather stones to put in the freezer to show off to friends and relatives. He noticed how his dad was quiet after watching the storm destroy the wheat crop which was over half the family's income for the year. The year before the combine and wheat field burned and was not insured. The family needed this crop. Scott's dad persisted. Farming was in his bones. Even with the difficult times, his dad was right where he wanted to be. He knew his real wealth was in his family and they would move forward. From this Scott learned how patience and persistence pays in the long run.

Scott would often accompany his mother to town. On those occasions she often stopped to see the elders of the community and their family. It wasn't what a young child had in mind of a fun way to spend his time. From those experiences he learned compassion. His mom took food to them and then stayed to visit listening to them.

While working as an executive in large corporations, Scott had a difficult time separating work and family, especially when he was working in Tokyo, Japan. Working long hours is expected and competition is immense. He was looking for more and wanting to be more even when he was at the top of the company. His competitive side did not allow him to let go and find happiness in the little things in life. He wanted a way to find happiness in all that he did. That lead to looking at himself from the inside out. He began to focus more on spirituality. He found happiness was always within grasp. It just meant he had to change his way of thinking. He met other people in the workplace who were searching just like he had been. This led him on his new career with LinkedIn and his book.

Scott found that both in the workplace and life, when making decisions, people need to listen to both what their mind and their body tells them. For instance, there are times you may have a difficult choice to make. Your mind may tell you to go for it, but in your gut you know it is a bad idea. It could be a job opportunity with more money arises, but the job requires a move. You may want the chance for more money, yet the move would cause strain on the family. The mind and body are not in sync. Your mind tells you it is a good choice but you feel conflicted. Time with family could possibly be compromised and not worth the raise in pay. It is not the right choice for you.

Another way people can change is to look for the positive in their life. Keeping a journal or telling someone three positive events that happen during the day is a good way to begin. Instead of complaining that it took an hour to get the lawn mower to work, think about even though it took a while to get it to work the lawn is mowed and the job accomplished. Do not dwell on the negative.

Compassion for others is a way to help yourself and others. Scott tells of a day he was not getting anything done. He was angry with how things were turning out. He needed to mow the lawn and the mower wasn't working. He spent a great deal of time getting it to work. When he did, he was still grumpy. He looked over at his neighbor's yard which needed mowed. His neighbor had just had a knee replacement and had other issues he was dealing with. Scott thought how lucky he was. Even though he and the neighbor were not close friends, when he finished his yard, he mowed the neighbor's yard. It make his mood change from negative to positive.

In his book, Scott tells several stories about his journey in life to find happiness. Everyone's journey is different. However, if we are mindful of ourselves, have an optimistic attitude and compassion for others, we can find happiness in life.

Mike Robbins, author of We're All in This Together, said, "In The Full Body Yes, Scott Shute shows us that optimism, self-awareness, and compassion aren't just feel-good concepts-they're how we build a great career and a great life."