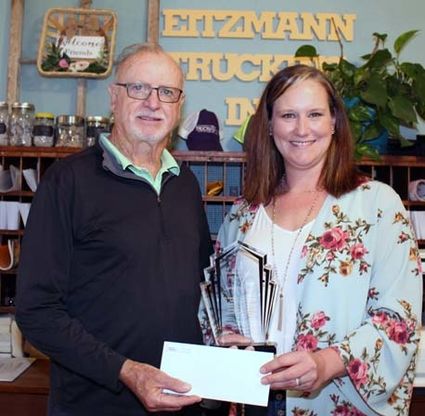 Kirchhoff is the daughter of Jane and the late Steve Headrick. She is a 2001 graduate of Superior High School. Sarah earned a bachelor of arts degree in business administration, with an economics minor, from Hastings College in 2005. She also earned a coaching endorsement from the college.

Sarah and Mike Kirchhoff married in May, 2004. They are the parents of three children: Ava Marie, 13, Korbin, nine, and Krosby, five.

Sarah and Mike are the owners, along with Jane Headrick, of Eitzmann Trucking Company located in Superior. They purchased the business from Tim, Scott and Greg Eitzmann in January, 2014.

Eitzmann Trucking serves customers in Nebraska, South Dakota, Kansas, Oklahoma, Texas, Iowa, Missouri, Colorado and Arkansas. They haul grain, rock, feed, fertilizer, rock salt and whatever can be put in a hopper. They haul hay and heavy equipment on their step deck trailer. The company utilizes 10 full-time and five part-time drivers to serve their clientele.

Sarah tends to a variety of duties in the office. She builds routes and dispatches loads for the drivers, contacts customers and solves whatever problems arise in the course of the day.

Kathy Baker does the billing and payroll along with other administrative tasks.

Mike assists with driving and servicing the equipment owned by Eitzmann Trucking Company. He delivers smaller loads of rock to customers.

Sarah has been active in community affairs ranging from scouts to sports.

Kirchhoff was the Superior Junior High School basketball coach for 15 years. She is a past Superior Country Club board member. She has coached basketball, track, football and T-ball for the Superior Youth Athletic Association (SYAA). She is a member of the Superior Red Caps.

Sarah is a member of the Superior Elks Club.

She is a member of St. Paul Lutheran Church in Hardy. She serves as the bookkeeper for the congregation.

She was a Cub Scout Den leader for several years,

Another outlet for Sarah is the Purple Moose. She designs and makes shirts, mugs, decals and tea towels. She enjoys creating and making new designs for friends and the community.

Along with her mother, Jane, she manages Homestead Lodge LLC. The firm has two rental units. One is located above the Eitzmann Trucking Company Office while the other is a barn loft at the Headrick farm. Both units were gutted and rebuilt by the late Steve Headrick. The units are available for short term rentals.

Kirchhoff plans to keep on trucking, literally and figuratively, to a better future for her family and community.