Chesterfest - A full weekend of fun 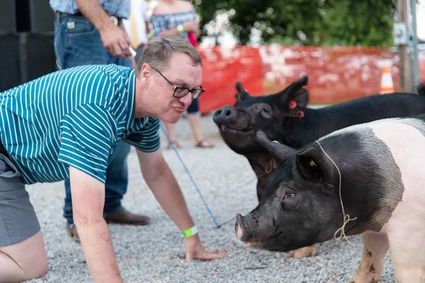 Chesterfest was held this past weekend in Chester. During the band intermission, winners were announced for the "Who will Kiss the Pig" fundraiser, where people voted with their dollars to see who would plant a wet one on a local sow. A tie was declared between Roger Crouse and Dallen George, who were both great sports when the time came.

Chesterfest was held this past weekend in Chester and peaked with concert by Keith Anderson. The weekend was filled with a range of events and great food.

Thursday night started with a Farmer's Market, and the vendors sold out quickly. Friday night saw the beginning of the sand volleyball tournament on the new court in the park. With music playing and the beer garden open, it was a summer night in the small town.

Things got off to a fast start on Saturday morning with the inaugural 5k run and walk event. Top finishers were Elijah Keilwitz and Katelyn Richardson in the Mens and Womens...