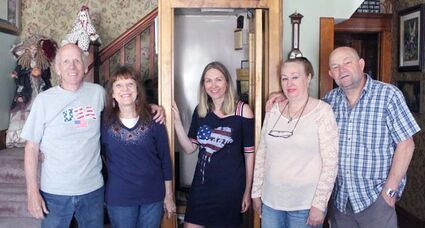 David Frey (left), Karen Frey, Sasha (Alexandria) Frey, Nina Gutnova and Sasha (Alexander) Gutnov are not about to place a call to Moscow from the vintage telephone booth in the Frey's dining room. The Gutnovs were guests at the Frey residence in Superior. Sasha (Alexandria) is married to Scott Frey, Denver. Scott is the son of David and Karen. He and Sasha met when they were both university students.

The David and Karen Frey residence resounded with the sound of the Russian language this weekend. Their son, Scott, a Denver resident, has been married to Sasha since 1999. Sasha is a native of Ossetia, a region of the former Soviet Union located on both sides of the Greater Caucasus Mountains. Ossetia is now divided into North and South Ossetia. Portions of the country lay within the borders of Georgia. Russia has backed the government of South Ossetia. The northern part of the country is known as North Ossetia-Alania and is a member of the Russian Federation.