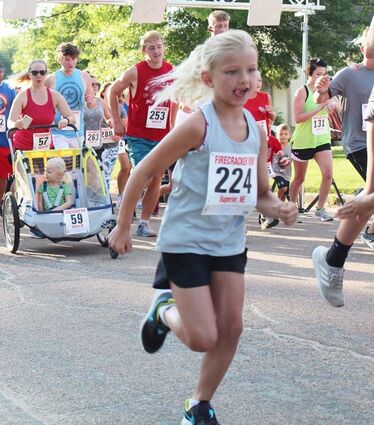 Blakely Chadwell runs with a smile on her face as she heads out on the 39th annual FireKracker Run with a host of other competitors, Sunday, in Superior.

The weather conditions were ideal fore Sunday's 39th annual Firekracker Run in Superior. The temperature was in the 70s. The sky was partly cloudy, a gentle breeze was evident and the humidity remained low. Runners of all ages and from several states had registered for the event sponsored by the Superior Joggers.

The start and electronic timing finish lines were by the band shell in City Park. More than 345 runners were entered in different age and distance categories. The races were a one mile, two mile, 10K run and the one mile predict where individuals attempted to meet a time they det...