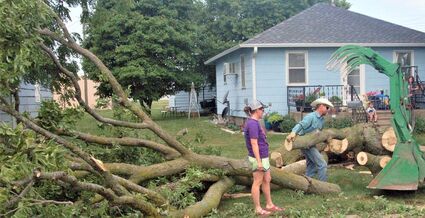 Sunday morning, Dan and Selena Laughlin and family helped Pat Faimon clean up the tree that had fallen across the street a block south east of Main Street in Lawrence. Selena noted they were going to be bringing cattle to the Nuckolls County Fair that morning, but that effort was delayed because of the storm damage in front of her father's home.

If you've lived in Nebraska very long you will have learned that 'Wind Storms' are a fact of life. They are part of life on these prairie grounds we live on.

A whole lot of Nebraska experienced such storms last Friday night with reports coming out of Omaha of 96 mile-per-hour winds.

We here in south-central Nebraska also had a part of that storm, but maybe just not a bad as Omaha did.

In talking to the South Central Public Power District representative the area of northern Clay County seems to have received the most damage in its area. There were two 'double pole' structures down south o...