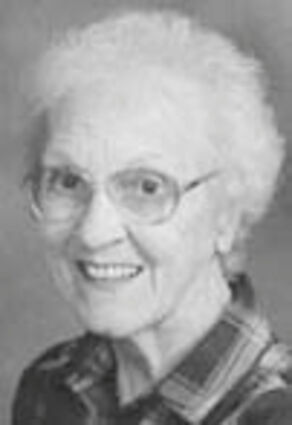 Ann C. Konen, the daughter of Rosie (Hemberger) and Francis P. Horton, was born Oct. 6, 1929, at Bladen, Neb. She died Friday, July 2, at the Good Samaritan Center in Superior.

Ann lived in Bladen, Hastings and the Guide Rock communities. She received her formal education attending the Hastings schools and graduated with the Class of 1948. She then attended accounting school and was employed with Dutton-Lainson for a few years. She then worked for Lincoln Telephone Company until moving to Guide Rock in 1965.

She was united in marriage with William "Bill" Konen on June 18, 1955 at St. Cecilia Catholic Church in Hastings. After moving to Guide Rock, they started a dairy farm and raised cattle. Her husband, Bill, died on June 4, 2009.

Altar Society. In her leisure time she enjoyed sewing, reading, walking, Tai Chi classes and coffee time at the senior center. Bill and she enjoyed attending dances and wintering in southern Texas.

Preceding her in death were her parents; her husband, Bill; sisters, Cecilia Durham, Mary Flynn, Genevieve Stoeckinger and Rita Miller;

Surviving are a number of nieces, nephews, other relatives and friends.

The rosary was recited at 7 p.m., Wednesday, July 7, at the Sacred Heart Catholic Church in Red Cloud.