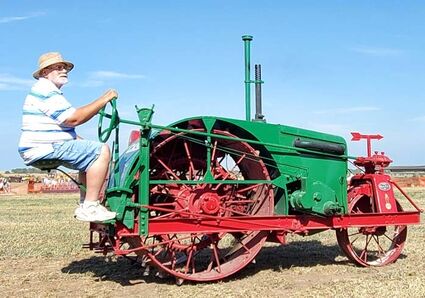 Joe Ballentine, Onaga, Kan., parades his 1918 Case J.I. at the Big Dig held Aug. 27, 28 and 29 at the Kurt Kocher Farm south of Concordia. Ballentine has had the machine for six or seven years having purchased it out of northeast Nebraska. Before that it was in South Dakota and it is thought to have first been used near Fargo, N.D.

With historical equipment crawling, rolling, moving or being displayed about as far as the eye could see, arriving at the site of the "Big Dig" was a bit of a "Toto, I've a feeling we're not in Kansas anymore" experience. "The Big Dig" is a simple moniker for the event's official title, Historical Construction Equipment Association (HCEA) International Convention and Old Equipment Exposition hosted by Prairie Plowing Days.

The Big Dig sprawled over a larger than half-section area of the Kurt Kocher farm in Cloud County, Kan., just northwest of Glasco and south of Concordia. With the size of the location, activities of the event had plenty of acreage to plow, dig, scrape, dredge, mi, and bulldoze. Attendees could look at, feel, touch and sometimes drive the old equipment. They also could travel the site via the bevy of "people movers" – tractors and trailers – driven by volunteers.

Not everything was mobile – attendees could walk through look at and touch antique machinery in three buildings across the road at the Kocher homestead.

Plus, on the grounds, several collectors created a large display of stationary gasoline engines produced by Ottawa Manufacturing of Ottawa, Kan. The Warner Family of Ottawa began producing gasoline engines around 1906 and continued production until about the 1930s. Ottawa engines varied from 1 1⁄2 horsepower to large 22 horsepower machines.

The larger engines are quite hard to find though the smaller ones are relatively common, this according to collector Dan Baalina of Colby, Kan. Exhibitors Wayne Walker of Onaga, who displayed a 2 1⁄2 horse "Giant," and Rick Hendrickson of Hays were on hand to explain and talk about the engines and other Ottawa Manufacturing memorabilia.

Another "static" exhibit displayed items from the blacksmith and foundry course at Kansas State Agricultural College (KSAC is now Kansas State University). The course was taught from 1905 until in the 1950s. Many projects came out of the course – waffle irons, boot jacks, hit-n-miss engines and pliers – to name just a few. Ben Eckhart of Manhattan hosted his family's display. The display included lesson plans and instructions from the early 1900s.

For some, the show was a chance to display something new from something old. Shawn Strunk of Colwich, Kansas built his own Hit and Miss Model Tractor starting with a 1920 1-1/2 HP Economy Model E engine. The rest of the parts, the clutch, wheels and transmission, frame were hand-built. Yes, it runs!

Then there were the machines that moved – slowly, but they moved! The show had a cadre of steam engines. Eight-and nine-ton behemoths: an Avery, a Nicholas & Shephard, a Russell, a Minneapolis and an M. Rumley. Just as interesting, abet smaller, were a 1/3 model Case steam engine and an Iroquois steam roller.

The steam machines seem to require near constant care, a vigilant eye and on occasion, someone like Chris Housos (Minneapolis, Kan.) to crawl inside and adjust the grates in the fire box. Not a pleasant job on a hot afternoon.

For steam engine operator-inspector Cliff Silsby (Auburn, Kan.) the show started on Saturday, six days before the Friday opening. He and the Housos, Ted and Sherry (Bennington, KS), were on site adjusting, repairing, oiling, and greasing to keep the century-old machines they were responsible for in working order.

But, more importantly, they were there as officers and inspectors for the Kansas Antique Engine Show Safety Association (KAESSA). Silsby serves as both president and one of the three inspectors in the association. Ted Housos is an inspector while Sherry serves as the secretary/treasurer of the group.

KAESSA inspects all steam engines at every Kansas show. Without an inspector's okay, the engines can't be fired up. Thursday was inspection day for all the steam engines at the Big Dig. The engines are tested with a "cold water test" before any fire is started.

Jack Alcorn (Mankato) was "learning a lot" during the show as part of his training to earn his operator's license. As president of the Jewell County Historical Society, the owner of the Russell Steam Engine, he knew he had a reason to take the KAESSA's operator's classes.

During the Big Dig, he was keeping an eye on the Russell, adding fuel, checking the boiler and doing supervised operating. All as part of the process of earning his operator's license.

The Elledge family had the 1914 model 16-48 M Rumley engine at the show. Mike Elledge came with the machine from Green, Kan., Catherine Bell and Tom Elledge drove in from Sioux Falls, S.D. and Fred Elledge came from Oceanside, Calif. They met at the Big Dig to display the machine which has been in their family for 34 years.

The Avery steam engine is owned by Jerry Towes of Gossel, Kan. It was operated by Dalen Wolff and Dale Wolff of Cushing, Okla. The Nicholas & Shephard belonged to Don Blecha from Wichita. That company began making reliable steam engines in 1869. Though never in financial duress, the business sold out to Oliver in 1929.

The 1/3rd model Case steam engine was built in the 1970s by Randy Paden from Solomon. The Jowett Family from Missouri owns the 1910-1915 era Iroquois steam roller built in Buffalo, N.Y. The operator of that machine is seated very near the boiler – a "hot" seat for sure!

The other giants on display were the "Prairie Tractors" – an early gasoline or kerosene tractor. There were two Twin City tractors, six Aultman Taylors, one Minneapolis and nestled between its much larger cousins was a 1908 International friction driven tractor.

One of only three, the 1908 is the oldest tractor in Kansas. It is owned by Dan Crist (Quinter, Kan.). Crist also owns one of the Twin City tractors. The beautifully restored tractor has many parts, including the wheels, made by Crist himself.

There was a sorghum mill operated by the John Mick family (Carlton, Neb.). The mill squeezes juice from sorghum stalks as the first step in the process of making sorghum syrup. Calvin Bohnert (Jewell) displayed and operated hand corn shellers.

Then there was a large construction site in the western pasture of the show area. Drag lines, dozers, a Gradall, graders and a Euclid were making big strides in changing a couple of small ponds into one large one.

One drag line and crane operator was Jim Hornbostel (Palmer, Kan.). He has owned his machine, a 1958 American, for about 15 years. Clutches and brakes, hands and feet are used in tandem and opposition to steer the machine. Hornbostel said "Hand and feet coordination. You can't think about it too hard. You just do it."

Another unique machine working in the area was a 1960s era Euclid bulldozer with two operators. One operator to steer and operate each track. Each track has its own engine, transmission, differential and levers. The tracks can be operated in synch or separately to turn the machine.

David Dobratz (Council Grove, Kan.) took one of his Caterpillar dozers to the site. Working alongside other dozers and graders, dirt was moved with each pass and progress was made. Each operator seemed to know their job and the site was literally "crawling" with progress. 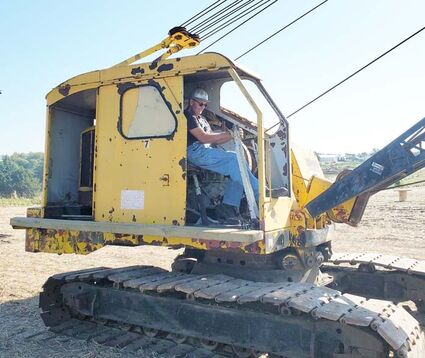 Jim Hornbostel, Palmer, Kan., drives his 1959 American Crane and Drag Line at the Big Dig. The Big Dig, a Historical Construction Equipment Association show and convention, was held near Concordia, Kan., Aug. 27, 28 and 29.

Construction sites often need concrete. The show had its own 1940s or 50s Binibatch machine. This machine created mixture of aggregate for concrete from up to three different materials. The Binibatch was donated to the Historical Construction Equipment Association by Chicago Technical College. This machine was just one of a great many in operation during the show.

Tynan Barclay, looking over the entire area on Wednesday before the Friday opening, compared the show to other shows where "most people just drive by" the machines and implements on display. "But, the unique thing about this show is the equipment will be running." He was right.

All in all, it was a wonderful show with the opportunity to learn something new about something old, see century plus machines at work, visit with passionate collectors and just meet some wonderful and friendly people. People like Steve Tintes of Windsor, Colo.; Jerry Bragg of Fort Collins, Colo., and Greg Roman of Harmony, Pa., who, in a few short minutes, changed this writer's very flat tire.