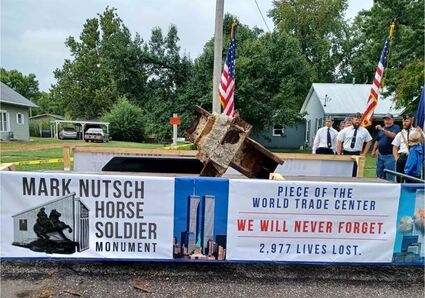 Cliffon held a parade Saturday to commemorate the September 9. 2001 when a series of four coordinated terrorist attack by militant Islamic terrorist group al -Qaeda against the United States of America. This float features a piece of the world trade center which was destroyed that day. Picture taken by staff from the Jewell County Record who attended the event.

Patriot Day falls on Sept. 11 (commonly known as "Nine-Eleven" and is remembered globally as the anniversary of the catastrophic terrorist attacks on the USA Sept. 11, 2001.

In the wake of the World Trade Center collisions, many brave men and women from emergency services risked their lives trying to help rescue victims of the attacks and of them, 411 lost their own lives. There were 2, 977 reported deaths because of the attacks.

By U.S. Law the official day of rememberance for the tragic events that happened that day has been observed every year since. Each year on this day, American fla...