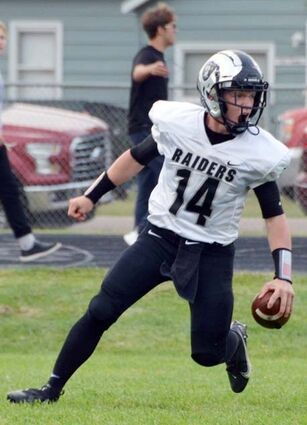 Krayton Kucera celebrates in the end zone during Friday's game with Arapahoe. He contributed to the game with three touchdowns and added both rushing and passing yardage helping the Raiders to 305 offensive yards.

At one time that was the cry of America, and for good reason.

Last Friday, the L-N Raider football team and fans also went west. This time it was to play Arapahoe High School for the second game of the young season.

The game was similar to the first game in that the results were not known until the very end of the game.

This week, however, the result was not as favorable as the first week. After winning the first game of the season by one point, 58-57, this game was lost by two points: 28-30. (Missed two PAT attempts.)

Yes, the trip out west was an excitin...