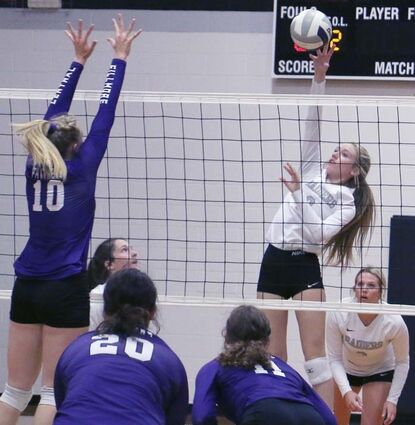 This week,Lawrence-Nelson played in volleyball triangular with Fillmore Central and Thayer County. Sydney Biltoft (2) gets a kill on this spike. Sydney had an awesome night with her spiking and also blocking the opponent. Photo by Sandra Schendt.

The Lawrence-Nelson volleyball team split a pair of games at their triangular match at Nelson last Tuesday. The Raiders handed the Fillmore Central Panthers a three-set, 25-21, 23-25 and 25-21 loss. The Raiders then fell to Thayer Central in two sets, 21-25 and 13-25. The Silver Lake Mustangs swept the Raiders in three sets, 23-25, 20-25 and 21-25, at Nelson, Thursday. The Raiders were in opening round action at the Hastings St. Cecilia tournament Tuesday with results unavailable at press time.

Emma Epley was the lead killer against Fillmore Central with 10. Aleah Heikkinen stepped up wit...