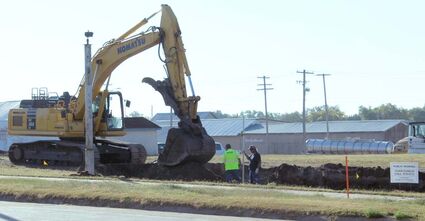 Dirt work is underway for a new retail establishment in Superior. The building is to be constructed on the site of the former Jensby Truck Sales lot on West Third Street. Above a large backhoe breaks up the old concrete parking lot. Other equipment is leveling the site and compacting the earth.

Something is going on in the fringes of the Superior business district but what?

We haven't been officially told but speculation says Superior will soon have a combination Dollar Tree and Family Dollar Store.

Editorial writers for the newspapers published in Belleville an...