SHS football loses a tough one to Sutton 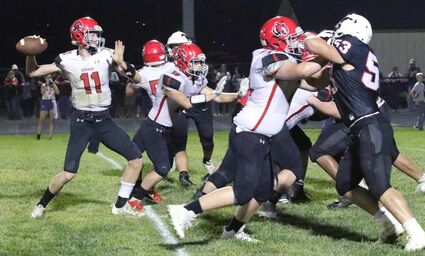 Dane Miller (11) looks down field for a Superior receiver as Clayton Morris (18) and other teammates provide protection. The Wildcats lost a close 28-21 contest to Sutton at Sutton Friday.

It was a tough loss to take for the Superior Wildcats. Their road trip to Sutton resulted in a 28-21 loss to the Mustangs.

The teams played each other even with the score tied at 14 all when the half arrived.

Sutton managed to take a 21-14 lead into the fourth quarter but the Wildcats did not give up. Sutton scored a touchdown and took a 28-14 lead. Superior kept up the pressure and scored with two minutes remaining. The on-side kick was successful as they recovered the ball to take possession with good field position.

This is where that intangible element introduces itself. A less that stellar call by an official robbed the Wildcats of their momentum. To compound their error, the officials started the clock running when it was not supposed to. As their is no mechanism to challenge this, the Wildcats coaching staff could only stare and silently rain their displeasure on the officiating crew. With no time left to complete their comeback, Superior was left with a loss when they could have at least had a decent shot at going into overtime. The loss left Superior with a 4-3 season record.

Dane Miller .completed 11 of his 25 pass attempts for 206 yards and two touchdowns. He had one pass intercepted

Miller carried the ball 16 times for 35 yards. Clayton Morris was the ball carrier 12 times as he gained 88 yards. Tyler Everhart took the ball four times for five yards and a touchdown. Humphries had zero yards to show for his two carries.

Dane Miller (11) protects the football as he scampers for yardage against Sutton during Superior's loss at Sutton Friday.

The Wildcats will host the deceptively dangerous Doniphan-Trumbull Cardinals for Friday's Homecoming Game at Brodstone Memorial Field. The Cardinals have lost three of their games to power house Catholic school teams with winning records. Kickoff is set for 7 p.m.