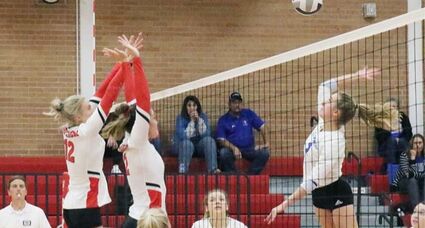 Shayla Meyer (12) and Cailyn Barry (2) team up to return the ball for Superior during their Southern Nebraska Conference tournament match. Brooklynn Grabast (8) is ready to provide any needed assistance. Superior placed second after losing to Fairbury in last Thursday's final round.

The Superior High School volleyball team took second place at the Southern Nebraska Conference tournament when they fell to Class C-1 Fairbury, 25-21, 25-23, 18-25 and 18-25, at Milford Thursday. The Wildcats opened sub-district play at Superior Monday. They swept Sandy Creek in three sets, 25-16, 25-19 and 25-8. They faced off against Sutton in the final round of sub-district play Tuesday, at Superior. Results of the match were unavailable at press time.