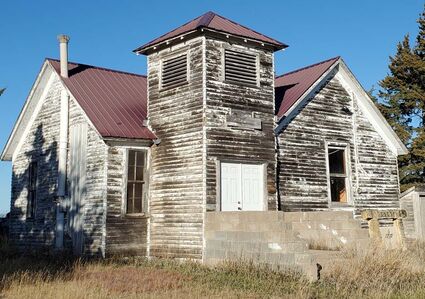 Fading and forlorn, the Odessa Episcopal Methodist Church is a reminder of the "flourishing" 1880's community of Odessa. Located on the western edge of Jewell County, the community had a post office, two daily stages, the church and a school.

The Odessa Post Office, the "flourishing" community of Odessa, Odessa Township, Odessa School District No. 130, the Odessa Cemetery and the Odessa Methodist Episcopal Church were all named after Odessa, Russia, the large Ukrainian port city on the Black Sea.

That Odessa still exists. The Jewell County namesakes are not so fortunate. Today the township and the fading and forlorn church building with the cemetery on K Road are all that remain.

Where exactly was the Odessa Post Office and the community of Odessa? The 1880 Kansas State Gazetteer states it was a "recently established pos...