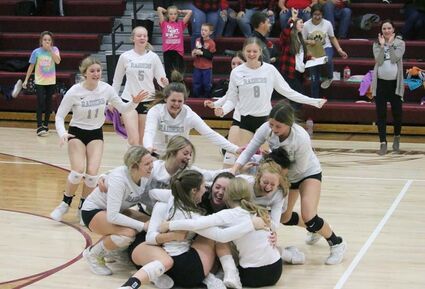 "The right to celebrate:" The Dog Pile . . . In many sports a team 'Dog Pile' is the manner of celebrating a major victory. The Lawrence-Nelson Lady Raiders celebrate winning the Class D2-6 sub-district tournament this week in the prescribed manner. The victory was the team's fourth victory in a row, gave the right to play in the district tournament and was the team's 17th victory of the season. (Photo courtesy of Denise Mazour.)

The highest seeded team (Silver Lake) in the Class D2-6 Sub-district tournament played the lowest seeded team (Franklin). This was the 4th meeting of the schools this season and Silver Lake won the first three games.

Franklin pulled off the upset giving credence to the old wives tale: "It's tough to beat a team four times in a season."

Then . . . in the championship game of the Sub-district our L-N Lady Raiders played Franklin knowing full well of Franklin's win over Silver Lake and also aware this game would be its third game of the season against Frankl...