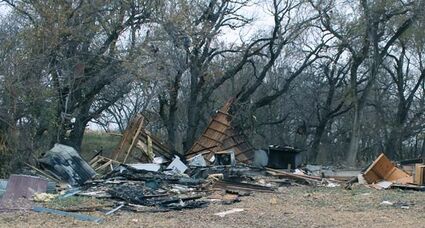 An explosion, followed by a fire, leveled this residence, located southwest of Bostwick, being used as a hunting cabin, according to Jim Bolte, foreman at the Nuckolls County Road Department, Sunday. The house is on the land of John Lange. Members of the Guide Rock and Superior Volunteer Fire departments responded to the site. A leak from the propane tank filled the building with gas which ignited. There was little left to suggest this was once a sturdy house. No one was in the house when the explosion occurred.

A three-bedroom house, being utilized as a hunting cabin, was destroyed Sunday, when an explosion, caused by a leaking propane tank, leveled the structure. The building, located south of Road C west of Bostwick, was on land owned by John and Kelly Lange.

No one was present when the explosion and ensuing fire occurred. No injuries were reported among the fire responders.

The house was completely destroyed by the blast. Large pieces of debris were flung more than 50 feet from the house site by the force of the blast. The ruins were still smouldering Tuesday.