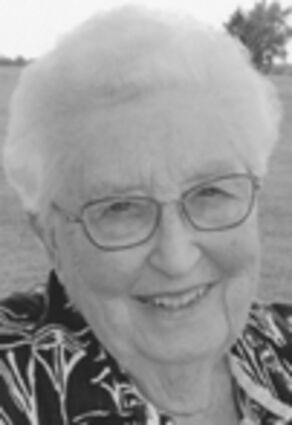 A Rosary was held Sunday afternoon at Sacred Heart Church.

Interment was in the Sacred Heart Cemetery east of Lawrence. A memorial has been established to be designated at a later date. Private condolences may be sent to the family at

was in charge of arrangements.

near Lawrence. She graduated from Lawrence High School. She married Donald B. Kucera on Sept. 9, 1952, at St. Stephens Catholic Church.  To this union six children were born: Donna, Carolyn, Arnold, Gerald, Arlene and Barbara.

Out of high school, she taught at a country school until she married,

became a farm wife, mother and grandmother. She worked for ESU 9 at

Lawrence Public School where she mentored and helped teach many. After retirement, she enjoyed helping a day care provider in Lawrence. But in

later years, her passion was quilting. She sewed and helped quilt

every perfect stitch with love with her quilting friends. Also, she enjoyed playing bridge and those afternoons of card playing. Betty was a member of Sacred Heart Catholic Church, Sacred Heart Altar Society and the American Legion Auxiliary.

Betty is survived by two sons, Arnold (Carol) Kucera of Hastings and

Betty was preceded in death by her parents; husband; daughter, Carolyn

Mom has always been a huge prayer warrior for all of us. And always

had her rosary beads close by.