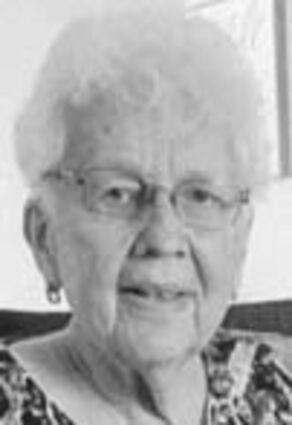 Helen's parents moved to a farm west of Bostwick when she was 9- months-old. She attended District 10 school for eight years and graduated from Superior High School in 1953. She worked at Security National Bank for four years and was united in marriage to Donald Gebers, Nora, on April 15, 1956, at Salem Lutheran Church. Don and Helen were blessed with three sons, David, Steven and Thomas.

She was a life-long member of Salem. Helen worked alongside of her husband on the farm for many years and cooked many meals for hired men. She sang with the Farmerettes for 45 years and was a member of the Nora Club for more than 55 years. Helen also sang in the church choir, taught Sunday and Bible School, served on the kitchen committee serving funeral dinners and lunches and was active in the Women of the Church. She also enjoyed going to ball games that her sons and grandchildren played in. Helen was also a long-time member of the Ruskin Legion Auxiliary and held several offices.

She was preceded in death by her parents, Roger and Hattie; her husband, Don on June 21, 2010; in-laws, Rudolph and Adella Gebers; and brother and sister-in-law, Richard and Gloria Wulf.

Her funeral will be held at 11 a.m., Friday, Dec 17, from the Salem Lutheran Church near Superior with Pastor Ethan Feistner officiating.

Music will be congregational hymns "Here I Am Lord," and "Lift High the Cross," and solos "We Celebrate Your Life," and "On Eagle's Wings," by Stephanie Thayer and Sonia Schmidt as the organist.

Visitation will be held from 4 to 8 today (Thursday) with family present from 6 to 8 p.m., to greet friends.

Interment will be in the Salem Lutheran Cemetery near Superior.

In lieu of flowers, memorials to Salem Lutheran Church.

Condolences may be sent to Megrue-Price Funeral Home, 750 N Commercial, Superior, Neb., 68978 or in care of http://www.pricefuneral homes.com.

Megrue-Price Funeral Home of Superioris in charge of the arrangements.