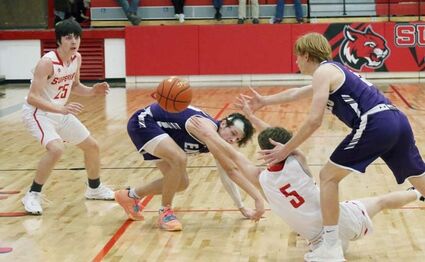 Roscoe Baumbach (25) awaits the pass from Superior's Tanner Theis (5) during the Wildcats win over Southern Valley at Superior Friday. It was the first win of the season for Superior.

The Superior High School boys basketball team dropped an 82-48 game to Blue Hill at Blue Hill last Tuesday. The Wildcats earned their first win of the season when they downed the Southern Valley Eagles, 39-31, at Superior Friday. The Wildcats were not as fortunate when they were handed a 49-18 loss at the hands of the Centennial Broncos at Utica Saturday. Superior opened play in the Runza Holiday Tournament opening round game against Cross County at Superior Tuesday. Results were unavailable at press time.

Superior stayed close to Centennial in the first quarter, trailing 13-10 at the end....