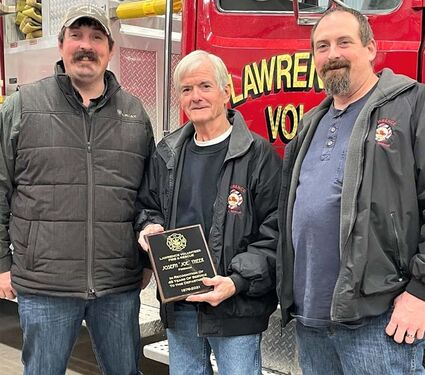 Father and Sons Act . . . It doesn't happen often, but a volunteer in the Lawrence Volunteer Fire and Rescue Service ended 45 years of service to the residents of the Lawrence Fire District in December and was recognized with a plaque presented to him by his two sons who are presently also volunteering their services to the Dept. Above are Adam Theer, Joe Theer and David Theer.

The Lawrence Fire and Rescue Service annually hosts a dinner and recognition event in December for its past and present members. In December, the group recognized the 45 years of service volunteered by Mr. Joe Theer after their dinner.

Joe has served the fire fighting crew and has also served the ambulance crew as a driver.

Greg Pohlmeier, fire chief, thought it only proper that Joe's sons, David and Adam, present their father with the plaque presented to all retiring volunteer. They did so with apparent joy as shown in the picture above.

At the present time, Chief Pohlmeier noted most...