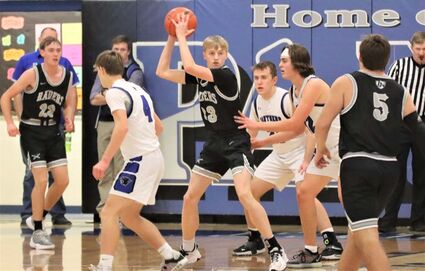 A number of sophomores are getting a lot of playing time this year for the Lawrence-Nelson Raiders. Above, Clay Williams secured the ball against Hershey for L-N and looks where to go from there. Also in the picture are: Logan Menke (23) and Toby Kotinek (5). In the Gering game, Clay scored nine points and grabbed three rebounds. (Photo courtesy of Denise Mazour.)

Holiday Tournament are popular with basketball coaches and L-N took a trip out to the sand hills this year as they played twice at Hershey, Neb.

They took a step up with opponents in Class C-1 and Class B, but did make an account for themselves winning one and losing one. The games were pretty well played, but the boys were just a little out-of-step in the first game.

L-N – HERSHEY: 29-45: This reporter isn't sure of heights, but it appeared Hershey had a couple of tall players, capable to controlling the court under the basket and they limited a number of Raider drivers to the basket....